A potential association between androgen deprivation therapy (ADT) and increased cardiovascular (CV) risk in prostate cancer (PCa) patients has been found. Cardiovascular health is an important consideration for PCa patients, as a 10-year analysis found CV event rates of 17% to 27%. A previous trial reported major adverse cardiovascular events (MACE) in 2.9% of PCa patients receiving relugolix and 6.2% of patients receiving leuprolide over a 48-week timeframe. Additionally, CV risk and mortality has been reported to vary by race. Based on a database of PCa patients between 2007-2014, the distribution of patients by race were 78% White, 15% Black, and 7% Other race groups. To the best of our knowledge, no studies have evaluated the risk of MACE in different racial/ethnic categories using real-world data from PCa patients receiving ADT. This study aims to present MACE risk for PCa patients of different races using a real-world database.

Analyses of US electronic medical records (2010 to 2020) of PCa patients (n=45,059) receiving LHRH agonist and antagonist injections were conducted to evaluate the rate of MACE within 6 months and 1 year of ADT initiation. The database contained 178,388 LHRH agonist and antagonist injection entries and 965 documented MACE events. Exclusion criteria included a lack of ADT initiation date and MACE within the 6 months prior to ADT initiation. Only subjects with 6 months and 1 year data points (the duration of the time periods analyzed) were included in the general analysis. MACE was defined as myocardial infarction, stroke, and death from any cause based on a recent study. The first MACE experienced was used for analysis, and events occurring on the day of ADT initiation were excluded. Rates of MACE were calculated for the analysis set and the following categories: White; Black; Asian.

Rates of MACE in PCa patients in the first year of ADT were generally low at 0.5%, and were lower than previously published MACE risk for PCa patients on ADT. This may potentially be due to underreporting; however, the 10-year analysis in >45,000 patients is likely reflective of the real world and the distribution of race groups was similar to what was previously reported. Risk of MACE was found to be significantly higher in White patients than Black patients. These results suggest that race should be considered a predisposing risk factor for CV disease in PCa patients undergoing ADT. As the reasons for why race is a predictor of MACE risk is currently unknown, future studies evaluating the role of co-morbidities on MACE risk for PCa patients during ADT may be helpful to identify other CV predictors. 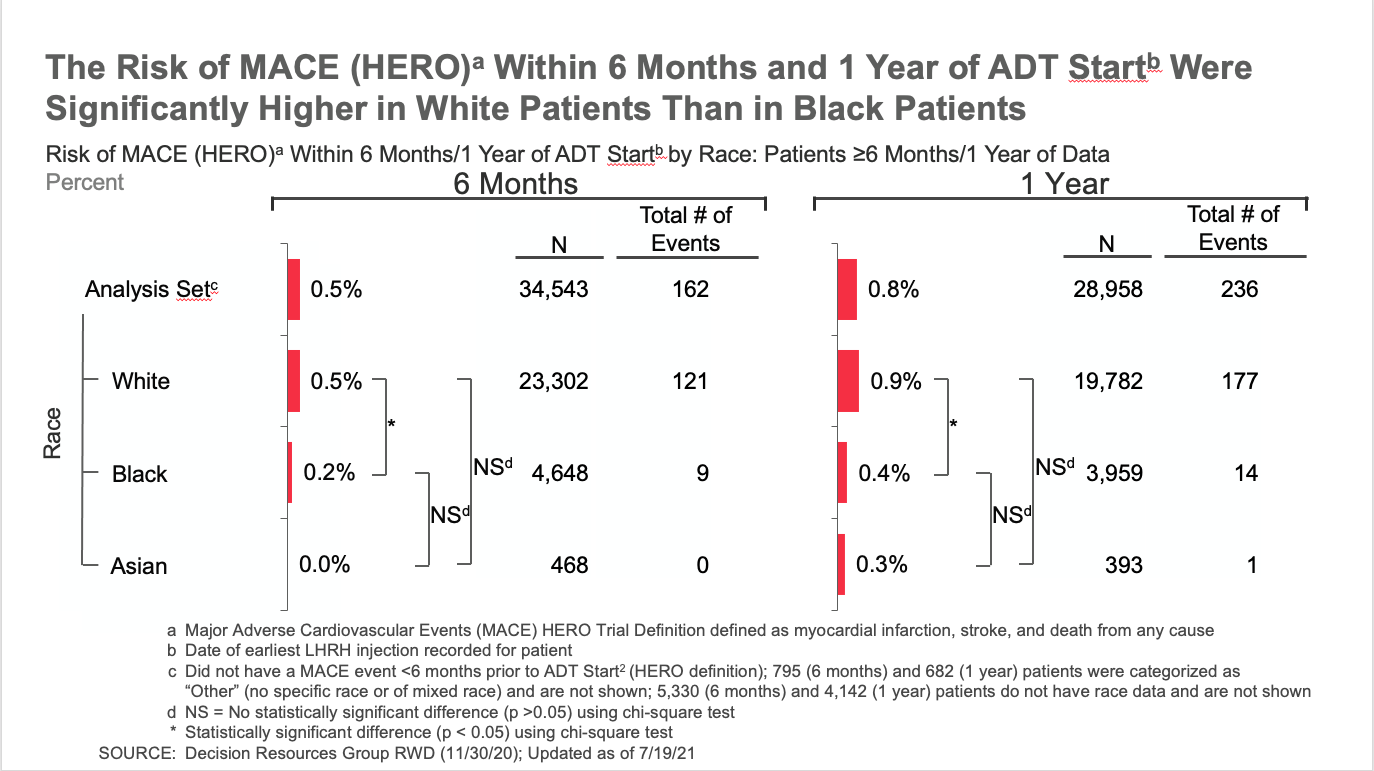