The United States Preventative Services Task Force (USPSTF) recommended against routine prostate-specific antigen (PSA)-based prostate cancer (PCa) screening, initially for men older than 75 years in 2008, and then for all men in 2012. We evaluated the incidence of metastatic prostate cancer (mPCa) before and after the USPSTF recommendations against routine PCa screening.

Using the recently released Surveillance, Epidemiology, and End Results (SEER) 18 registry incidence data, we identified men aged 45 years and older with a diagnosis of invasive PCa from 2004 through 2018. All men were stratified according to race and age (45-74 years vs. ≥ 75 years) at time of diagnosis and age-adjusted incidence rates (AAIR, per 100,000 population) with delay-adjustment for localized and metastatic disease (defined using SEER Summary and AJCC staging systems). The Join-point Regression Analysis program was used to calculate annual percentage changes (APCs) and to quantify changes in trends in delay-adjusted incidence rates.

Analysis of emerging trends from the most recently released SEER dataset (2004 - 2018) indicate that, after an initial decline, the incidence rates of mPCa have increased significantly and coincides temporally with the USPSTF recommendations against PCa screening. These mPCa trends correlate with reported changes in screening practices following the USPSTF recommendations even after stratifying by age and race. 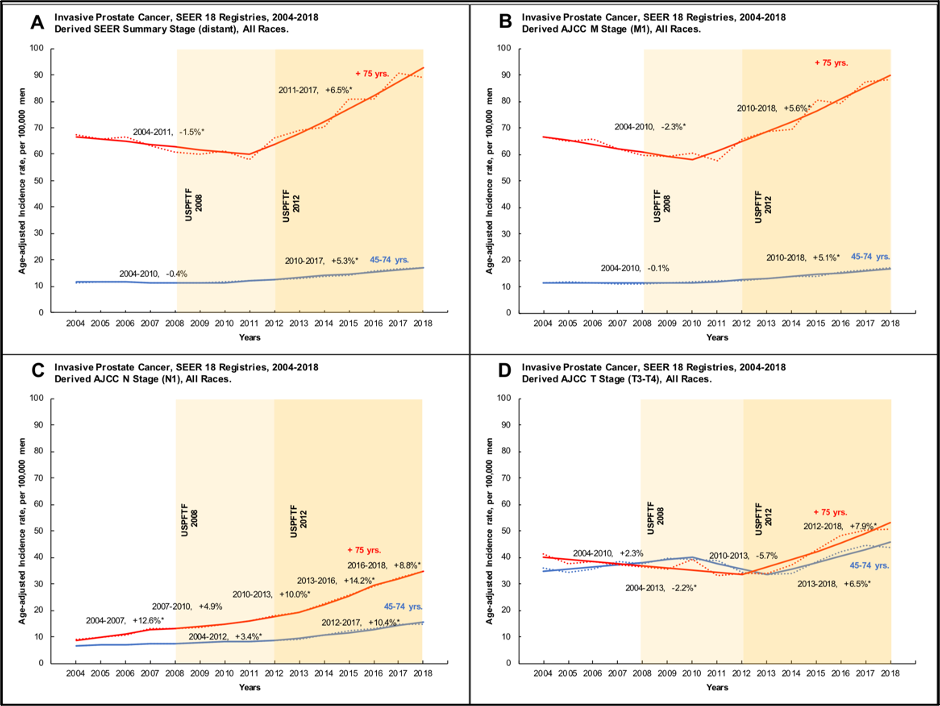